King Ayisoba at The Good Will Social Club 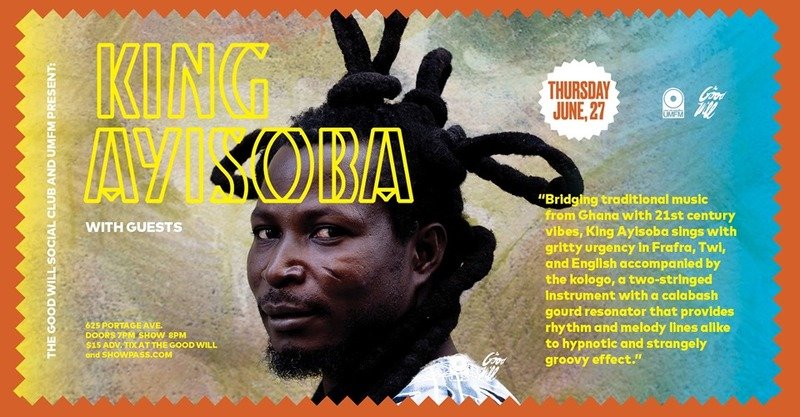 $15 advance tickets are available at The Good Will & here

King Ayisoba was born in 1974 in Bongo Soe, Bongo area, Upper East Region, Ghana, near Bolgatanga. He grew up in a small village and as a boy he always had his kologo with him whenever he took the family sheep and cattle out to graze. He played at markets, local bars and funerals until he was old enough to leave the region and try his songs on the people in big cities like Kumasi and Accra.

A useful musical collaboration started between him and the late Terry Bonchaka, a hip life artist from Accra. Bonchaka’s early death was a big setback to King Ayisoba but linking up with recording engineer and music producer Panji Anoff turned his fortunes around. The work of the two resulted in a first cassette and cd in 2006 called “Modern Ghanaians”. It contains songs with the flavor and spice of the modern hip life mixed with Ayisoba’s traditional style. The single “I want to see you my father” became a huge hit and in 2007 King Ayisoba was crowned the king in the Ghana Music Awards Festival held at the national theatre as part of Ghana’s 50th anniversary celebrations.

In 2008 “Africa”, King Ayisoba’s second album was released on Pidgen Music. Again a mix of electronic beat driven tracks and traditional style songs like the hit “The Whole World”. In 2005 King Ayisoba was invited for a project in Chicago, USA and since 2009 King Ayisoba has been a regular seen artist in Europe. He was invited by the Sababas project from Denmark and played on the Womex festival caravan. The following years he returned to Denmark and also played in Germany and Switzerland.

In 2012 King Ayisoba joined Dutch artist Zea on a tour through the Netherlands, Belgium, France, Switzerland and Germany and at the end of that tour the plan was made to release an LP with Ayisoba’s best songs, called “Modern Ghanaians”. In December 2012 King Ayisoba was nominated in the category best traditional song at the Okura African Music Awards in Abudjan, Cote d’Ivoire. In March 2013 King Ayisoba made his entrance in Russia and in May 2013 King Ayisoba returned to Europe with his own band from Ghana to promote the release of the LP on Zea’s own Makkum Records (MR 8) and to let as many people as possible hear the kologo music from Northern Ghana. The compilation received raving reviews all over Europe. What followed was a large tour of more than forty concerts along festivals and venues in Denmark, Sweden, The Netherlands, Belgium, France, Spain, Switzerland, Germany and Czech Republic. And King Ayisoba left the people wanting more.

So in March 2014 King Ayisoba returned with a full band of musicians and dancers and toured together with Zea all over Europe including the UK. In June 2014 the full band returned for the summer festivals including Roskilde Festival in Denmark and the Fusion Festival in Germany. Just before that tour his new album called “Wicked Leaders” was released on Makkum Records (MR 11). In October 2014 King Ayisoba did a full tour all over the UK and played the London Africa Festival. IN March 2015 the Wicked Leaders album was released in France by Mansa Live Productions and followed by a three weeks tour. On April six King Ayisoba won for the second time in his career the Ghana Music Award for best traditional song for the song “Mbhee” from the Wicked Leaders album. March 2016 King Ayisoba came back on tour promoting a new compilation he put together called “This is Kologo Power!”, and in the summer more festivals in Europe have seen and heard the hypnotic kologo grooves. In the meantime the band recorded new songs in a studio in The Netherlands with Zea. The new album, called “1000 Can Die” will be released by Glitterbeat Records in 2017 and more tours will follow.