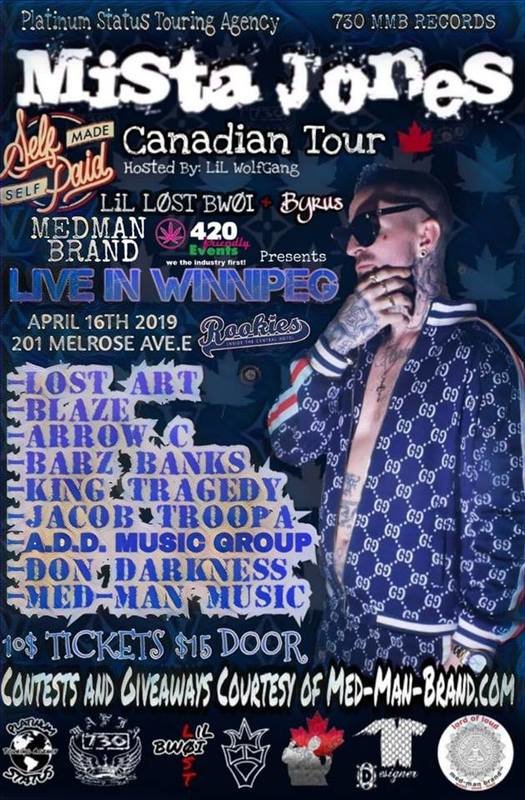 - 7th and 30th person through the door Get a prize courtesy of med-man-brand.com

**** Like The Mista Jones Page,
**** Share The event Page For the show You want to attend
****Tag 2 Friends you would like to go with on the event you shared
**** And Hash Tag #IAMCANADIANTOUR To Qualify

-BYRUS BIO:
Hey waddup ladies & gents! Im a HipHop/RnB/Rap artist rapping outta North Bay,ON,Canada. I write, freestyle, make beats, and produce my own music. Im a very outgoing and energetic guy who is funny as fuck. I like making people laugh and love having good times and making new memories. Keeping it real is how I do. My influences throughout my music career have been Eminem, Wu-TangClan,Necro,Mobb Deep, and D12. HipHop is my passion, pride and joy, and my way of life. I love performing live and getting the crowd all amped up!!
-LiL LOST BOI BIO:
30 year old Jesse gallant aka lost bwoi old with 2 daughters nevaeh , and bella.. Had a huge musical influence from his father that had jesse playing music his whole life. A love for rap n rnb music was enevidlble being the age of popluar music and also being able to relate from the only life he knew.. grew up in ottawa ontario moved around alot in his life meeting alot of people and experienceing life in more ways then can imagine Freestyling for half his life never thought hed be more then a table rapper until he moved out to a place where he didnt know anyone and had to start over.. The first time he ever thought his dream of being a musican eas possible was when he me mett jeff jones aka mista jones who has recently made him a member of 730 mafia money boys records, and recorded his first single... "Lil lost bwoi ft mista jones Dollar signs.

- from any of the opening artists

This show will SELL OUT so get your tickets fast!!!

730 Records Is presently planning Part 2 of Canadian tour...This Will be His 4th Headlining tour,

The first one, Named "The New Wave Tour" consisted of 10 cities with artists such as Evil Ebenezer
and Sans Pression on Select dates. His Second Tour "The Detour” consisted of 7 cities With artists
such as MadChild, Necro, Kung fu Vampire & Locksmith on select dates. His 3rd Headlining Tour Was
PART 1 of His 1st Full Canadian tour tittled ,Mista Jones -I Am Canadian Tour" Where He Starting in
Winnipeg MB (June 2nd) to St Johns NF (June 29). consisting of 7 of the 10 Canadian Provinces and 20 cities , Part 2 (West coast) is in The Works For April 2019 consisting of 27 cities


Mista Jones is not only an artist, he is an Audio Engineer Graduate from Recording Arts Canada in Montreal ,
He Personally Sets up his own shows and Tours ..
He has toured with Madchild and performed with many different artists such as:
Merkules, Riff Raff, Necro, Kung fu Vampire,Locksmith,Mayday, Rich Homie Quan Onyx, Evil Ebenezer,
Snak The Ripper, Swifty Mcvay of D12, Alpha Omega, Kryple of DoomSquad and Has Promoted shows
with Antlive BoomBapKings (Public Enemy Af.)
He has put together 3 Full albums
"Egotistic" (Available on I-Tunes & Spotify) in Which he produced entirely himself
"The New Wave" ( With Feats. From Alpha Omega , The son of Old Dirty Bastard "Y.D.B." ,Sans Pression, & Jessica Anbara)And the 3rd album is not yet Released ..

He also has Four Mixtapes available :

2 Can't knock me down


Jeff's story shows that consistency and hard work can pay off despite any sort of setback or obstacle.

It shows that anyone, at any point can turn their life around and achieve great things with the proper help and guidance,
even if he came from a not so wealthy family, and even if he had made bad decisions growing up,

At the end of the day he had a vision, and subconsciously making the right decisions in order to achieve it..


Mista Jones, A.K.A Jeff Jones, Youngest of three brothers Was born in Ottawa,Ontario 1987 and Raised in Gatineau Qc.

He did not come from a wealthy family and things didn't always come easy for him.

He was often Misunderstood and his parents (which are separated) didn't quite agree with his passion for music,

Both his brothers fallowed their Fathers footsteps in perusing a career in Computer Programming.

Jeff's Mother had a new man in her life and she then decided to move to Hawkesbury to join her new boyfriend but Jeff decided
to stay in Gatineau with his 2 older Brothers. Jeff was 15 years old at the time and was still attending high school.

Not having parents around made it difficult for Jeff to attend school everyday as his situation was different from his peers.

He then had no other choice but to assume responsibilities and be self sufficient. Money was also an issue so he decided to
start selling marijuana at school and in the neighborhood, which almost got him expelled from school but they did not find any evidence.

The school then tried again to expel Jeff because he was missing to much classes , but because he had good grades they weren't able to do so.

Jeff graduated high school in 2005 , by that time he had his own Studio and taught himself the basics in recording and was getting all his friends involved by getting them to start rapping even writing some of their versus.. By that time Jeff was getting heavy into selling all kinds of drugs and also started using.

Jeff's Mother had moved back a couple years later after her new man passed away of a heart attack,Jeff decided to move back with her so she wouldn't be alone in grieving ..After a couple months, Jeff's mother started noticing a lot of weird activity and caught on to what he was doing.. She then Decided it was time for a change but Jeff wasn't trying to hear it. So she had done some research and discovered an audio engineering coarse in Montreal in which she used to lure Jeff out of his Drug dealing lifestyle ,and on to pursuing a career that he had always dreamed of. Jeff Graduated Recording Arts Canada in 2010. Today he is getting ready to tour across Canada with a positive message.

"That consistency and hard work can pay off. Fallow your Dreams
Don't let anything or anyone tell you , you cannot achieve"
"You are the Creator and the Master of your own Destiny"


Spreading his story by reaching out to young upcoming artists or troubled youth
Who are going through a rough time , and may feel trapped or suffocated with their own issues .. To help them realize that they are not alone and with the right help and proper guidance , There is still a light at the end of the tunnel ...