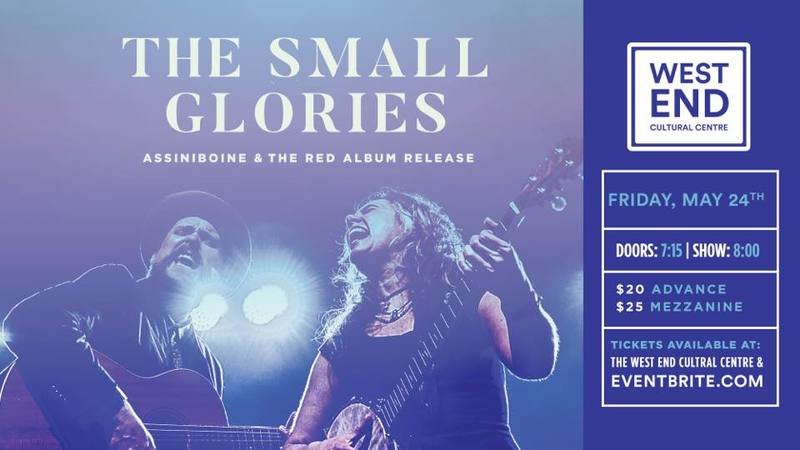 Roots powerhouse duo The Small Glories are Cara Luft & JD Edwards, a musical tour-de-force partnership planted on the Canadian Prairies. Thrown together purely by accident for an anniversary show at Winnipeg’s venerable West End Cultural Centre, The Small Glories could almost make you believe in fate.

With a stage banter striking a unique balance between slapstick and sermon, these veteran singer-songwriters have a way of making time disappear, rooms shrink, and audiences feel as they are right there on the stage with the band — writing the songs, living the songs, performing the songs. It’s not uncommon for listeners to find themselves laughing, dancing, crying, or caught up in a good ol’ fashioned sing-along. “We’re folk singers, we try to write stuff that people can relate to,” says the multi-instrumentalist Edwards, whose looming stage presence and penetrating eyes find him the yin to Luft’s petite, snort-laughing yang. The material of a Small Glories concert is welcoming in terms of subject, folk-pop melody and instrumentation — songs of love, loss, and environment, delivered with soaring, interwoven vocals on various combinations of stomping clawhammer banjo, guitar and harmonica. However, a Small Glories performance is really about what happens in-between the songs. “The feedback we get from a lot of audiences is that it’s not just about the music for them,” Luft says. “It’s the whole package.”

On record, The Small Glories take the musical synergy honed from hundreds of shows together, and expand it into a new soundscape amplified by pounding drums and other textural embellishments which only reinforce the magic of Luft and Edwards’ innate chemistry — a chemistry labeled the “Lennon-McCartney syndrome,” by Americana UK, writing, “Some things just work together… to witness a performance by The Small Glories is a rare opportunity to experience that indefinable quality that creates perfection.” But don’t just take a European reviewer’s word for it — the band’s debut album, 2016’s Wondrous Traveler was also praised in Pitchfork by legendary American rock critic Greil Marcus, who wrote, “…in moments (The Small Glories) find the darkening chord change the best bluegrass — from the Stanley Brothers to Be Good Tanyas — has always hidden in the sweet slide of the rhythm, the tiny shift where the person telling the story suddenly understands it.”

It’s this yearning for understanding which finds the band often taking more time to introduce a song than it actually takes to play it. Luft, an original member of harmony sweethearts The Wailin' Jennys and whose parents were folksingers influenced by the great activist Pete Seeger, knows that sometimes a song is all you need to bring people together. But often, it is more. “(Seeger) was the king of uniting people through singing,” Luft says. “There’s so much animosity and divisiveness in our world these days… as artists, part of our job is to somehow create unity.”

The Small Glories duplicate and reinforce each others’ many strengths and yet allow their distinct personalities to shine through, resulting in a live show that is as heartwarming as it is hilarious, as finger-picking proficient as it is relatable, and as Canadian as, well… it’s very Canadian. But that hasn’t stopped them from winning over audiences from Nashville to the Australian outback.

TSG's highly anticipated sophomore album “Assiniboine & the Red” officially comes out June 28 on Compass/Red House Records, but Winnipeggers are available to purchase the album in advance at the local pre-release show May 24.

If you purchased tickets for the show in November, those tickets will be honoured at the door.

Tickets available at Eventbrite or by contacting the WECC box office.