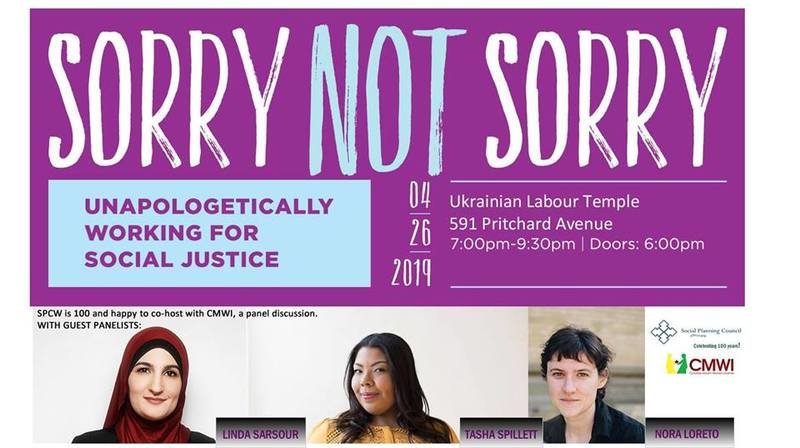 Time: 7pm (Doors open at 6pm)
After dinner refreshments will be served

Venue: The Ukrainian Labour Temple, 591 Pritchard Avenue.
Please note as renovations are pending, this venue is not fully accessible. There are 5 steps up to the main doors. Washrooms are located in the lower level and that is a flight of 14 stairs. Washrooms are not accessible in terms of fixtures, clearances, etc. There is a door at Pritchard and McGregor that could be used. The threshold is about 2 inches above grade. Once inside, it is only 3 stairs to the foyer level. Please contact [email protected] for more details. ASL interpretation will be provided.

All tickets sold for the original venue will be honoured at the door.

Our original venue cancelled our booking due to one of our speakers, Linda Sarsour.

Please check out our website, for our full response and to learn more about our event. We have added new links to add to the discussion. For anyone who simply wants to know more, as always, please consider the source of any links (including ours!) for explicit, complicit, conscious or unconscious bias and, most importantly, please read past the headlines. There is a great deal of media coverage both critical and supportive of Ms. Sarsour. We will not engage further by listing more and more links. The ones we have chosen to share offer perspective and/or context on the most prevalent criticisms of Ms. Sarsour. While we will maintain a space for constructive dialogue, offensive, violent content will be blocked, deleted and reported.

The Social Planning Council of Winnipeg is proud to celebrate 100 years by partnering with the Canadian Muslim Women’s Institute in a discussion about working together to create a truly just society. Please join an amazing panel of activists, Linda Sarsour, Nora Loreto, and Tasha Spillett, to hear about their successes and perspectives on making the changes that challenge the status quo and addresses bias. A moderated question and answer session to follow the presentation.
Come out, get energized and be part of that change!

SPCW began as an organization that sought to bring cohesion to the sector but still with the charity mindset to address the same social conditions that brought about the General Strike of 1919. However, we have evolved into one that focuses more on systems change as the only way to create true equity and social justice. At our 100th, we are looking forward rather than back.

Canadian Muslim Women's Institute (CMWI), a charitable organization that works towards empowering women, was founded in 2006 to fill the demand felt by newcomer Muslim Women. Since then it grew in capacity, the services offered and the clients served. By empowering women we empower their families, and consequently the whole community. CMWI is pleased to partner with Social Planning Council of Winnipeg in celebrating their 100th Anniversary.

Panel Speaker bios:
Tasha Spillett draws her strength from both her Nehiyaw & Trinidadian bloodlines. She is a celebrated educator, poet and emerging scholar, but is most heart-tied to contributing to community lead work that centers land and water defence, and the protection of Indigenous women and girls.

Tasha is currently working on her PhD in Education through the University of Saskatchewan, where she holds a Vanier Canada Award. In her work as a doctoral student, she is weaving in her cultural identity, and commitment to community to produce a body of research that echoes Indigenous women’s demands for justice for Missing and Murdered Indigenous Women, Girls and Two-Spirit People, and is a continuation of the resistance against the assault of colonialism that she has inherited.

Nora Loreto is a writer, musician and activist based in Québec City. She is the author of From Demonized to Organized, Building the New Union Movement and is the editor of the Canadian Association of Labour Media. She writes regularly for blogs and magazines, and wrote a chapter in Canada After Harper, released by Lorimer Publishers in August 2015.

Linda Sarsour is an award winning racial justice and civil rights activist, community organizer, every Islamophobe's worst nightmare and mother of three. She is a Palestinian-Muslim-American born and raised in Brooklyn, New York. She is the former Executive Director of the Arab American Association of New York and the co-founder of the first Muslim online organizing platform, MPower Change. She is a member of the Justice League NYC, a leading force of activists, artists, youth and formerly incarcerated individuals committed to criminal justice reform through direct action and policy advocacy.

Most recently, she was one of the national co-chairs of the largest single day protest in US history, the Women’s March on Washington. She has been named amongst 500 of the most influential Muslims in the world. She has won numerous awards including Champion of Change from the Obama Administration. She was recognized as one of Fortune’s 50 Greatest Leaders and featured as one of Time Magazine’s 100 most influential people in the world in 2017. She is a frequent media commentator on issues impacting Muslim communities, Middle East affairs and criminal justice reform and most recognized for her transformative intersectional organizing work and movement building.