Operators w/ Doomsquad at The Good Will Social Club 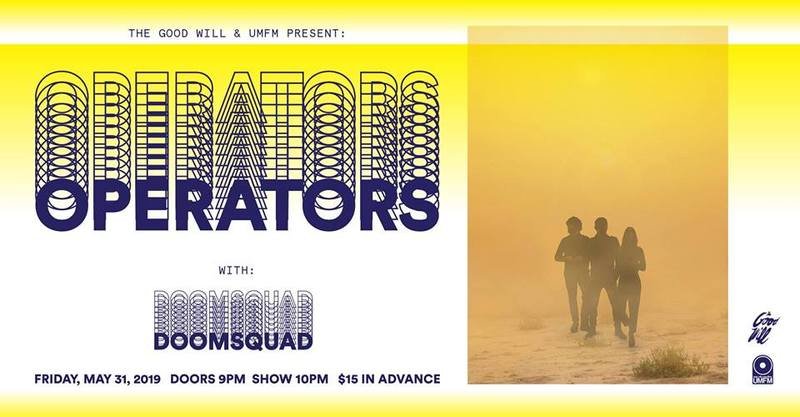 The Good Will & UMFM are proud to present:

$15 advance tickets are available March 22 at The Good Will & Showpass.com

Blue Wave follows the release of EP1, an upbeat, aggressively melodic collection of synth driven pop songs featuring the single "True" and gave us a taste of what was to come with the band. After a length of time on the road with the likes of Future Islands, New Pornographers and more, the band's sound evolved from an analog post-punk project to a more live, punked out sound, with Boeckner finding himself often strapped back into his guitar. The first single "Cold Light" demonstrates the beautiful melding of both worlds. The single wil be out January 29th via all digital platforms. Listen to via Pitchfork.

Dan Boeckner has shown his diverse musical taste over the years consequently, his decision to focus his attention on a new, electronic dance project shouldn't be surprising as it feels like nothing more than a natural progression from the first synth he bought for the debut Wolf Parade EP, to the primarily stark, digital sounds of Handsome Furs, and now the organic, melted, deeply dance driven Operators.

Even this far into the 21st century, the recent social media furor surrounding US congresswoman and free-style dancer Alexandria Ocasio-Cortez illustrated that the spectacle of someone dancing without compunction can still ruffle the right (and alt-right) feathers. In which case, all hail the third album from Toronto’s ardent, art-dance sibling trio DOOMSQUAD. Due for release on Royal Mountain Records on May 10 2019, Let Yourself Be Seen is the most assertive, ambitious, groove-sodden declaration of intent yet from Trevor, Jaclyn and Allie Blumas: the sound of dancefloor believers and thinkers firing on all personal and political fronts, at a time when we need it most.

Even if DOOMSQUAD never lacked the courage of their convictions, Let Yourself Be Seen ups the stakes. On 2016’s Total Time, the trio issued invitations to free your mind, body and spirit over dirty bass-lines and hypnotic disco jams. And yet, their reliance on unspoken sibling intuition left them fearing that much of its “message and meaning” had gone unheard. Thus, the trio took a more forthright approach for their third album, aiming to “crystallize what DOOMSQUAD is and what it means to us. What we always knew but put at the forefront of this record is that DOOMSQUAD is a project of protest, catharsis and emotional and spiritual reconnection through music and, especially, through dance-music culture. It’s about activating the body on the most fundamental level, into states of change, release and reunion.”

Richly steeped in the influences of acid house, West African disco, spiritual jazz, NYC no-wave and new-age ambient music, Let Yourself Be Seen hums with a sense of vigorous, invigorating purpose. After the overture of ‘Spandrel’, ‘The General Hum’ sends out a buoyant new-wave rallying cry for maximized engagement just when the world seems intent on stifling it. “Is there a place for spirit anymore?” it asks. Kicking in with a percussive bustle that all but defies you to try and stand still, ‘Aimless’ answers in the affirmative.