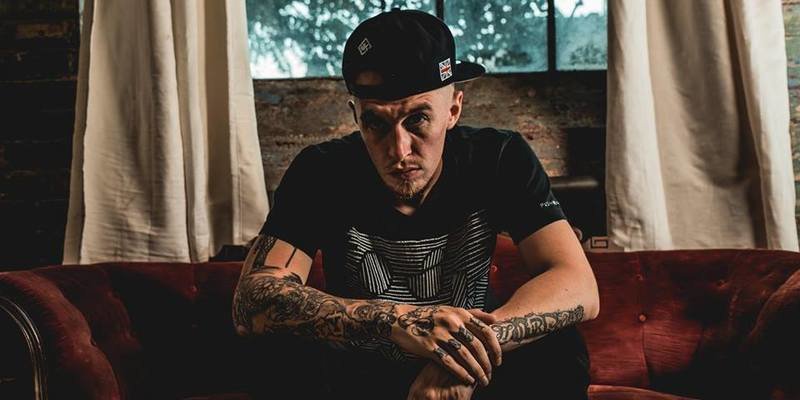 
Shotty Horroh, the acid‐tongued, viral battle rap legend, is dead; Long live Shotty Horroh rock n’ roll star.
On debut album Salt of the Earth, Horroh arrives like the fire breathing love child of Liam Gallagher, Alex Turner, and Sid Vicious: spilling the true blood of Manchester’s council estates,
snarling at a system built to hold him down atop crunchy, melodic riffs; it’s the sound of a nation ‐‐ indeed, a world ‐‐ in crisis, told by its prodigal son.
Born Adam Rooney in the Manchester inner‐city of Harpurhey (an area Oxford University honored with the title “most deprived neighborhood in England”), Horroh grew up the middle of three brothers to a single mother raised on a steady diet of Manchester City football, Stone Roses and Oasis.
A working-class hustler, Horroh discovered he had a natural talent for technical rhyming whilst whittling days away on the street corner, and, when a local rival bet he couldn’t beat Eminem’s favorite battle rapper Dizaster, the beyond green M.C. paid to have the legend flown in, only to embarrass him in battle. As Horroh recalls: “He told me he’d never been beaten so badly and asked how many times I’d battled. I felt bad telling him this was my first time ever.”
Only a year later, he took on the “undefeated” Arsonal Da Rebel in what is considered the best and most viewed English language battle of all time. Before long, Deadmau5 came calling and
soon he was hanging with Jay Z, moving to Toronto and becoming a star of King of the Dot.
But for Horroh, that era came to a sudden halt in May of 2017, when terrorists attacked his hometown.
Suddenly, being a boastful M.C. wasn’t him anymore. And, as a great man once sang, he needed to be himself, he couldn’t be anyone else. “I had to come to Canada and miss home to
realize how special my upbringing, my personality, and character was; the council estate was,” he says. “What a gift my mother, my brothers, my friends and my enemies have given me. I had
to realize that not being like everybody else is what makes me special. I needed to be telling that story.”
When a guitar broke out one night in practice, it all fell into place and the kernels of Salt of the Earth began to pop. What emerged was the sound of his musical roots. On songs such as “Shudehill,” “Alien” and “Dirty Old Town,” Horroh digs deep into the reality and rubbish of modern life: at times passionate, aggressive and intense, others heartbreaking and tender.
“Back home, rock and roll’s always been working class music. As a Mancunian, that sound just resonates more than anything else.” he says. “This is the first time in my career I’m showing
people Adam. For years I became Shotty Horroh for safety. Salt of the Earth is stories about Adam. And that’s how it’ll be from now till the end of time.”