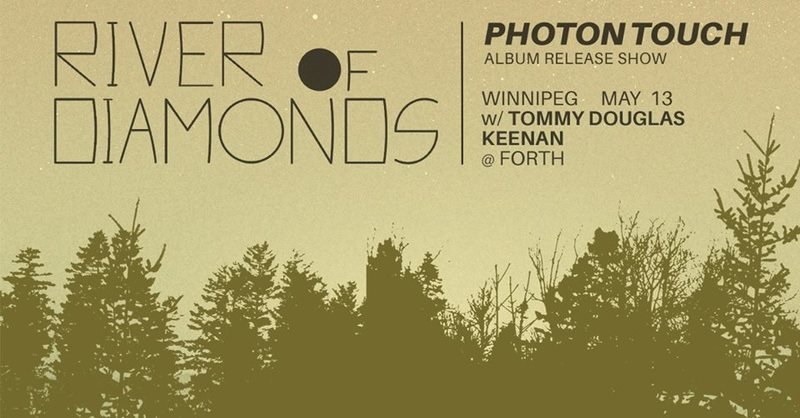 Poet Michelle Elrick returns to Winnipeg with River of Diamonds for a special show celebrating the launch of their debut poetry album + chapbook, Photon Touch. Tommy Douglas Keenan will open the show with new songs from his upcoming LP.

Early show. Doors at 7, Show at 8.
Tickets $10 available at: www.riverofdiamonds.ca/shows

RIVER OF DIAMONDS is poetry/pop duo Michelle Elrick and Michael Belyea. Their debut album 'Photon Touch' delivers spoken lyrics with a pop sensibility. Infused with ideas of world-making, images of space light, lost bees and smashed TVs, these new poems by Michelle Elrick are both deep-thought and light-hearted. Producer Michael Belyea, best known as a drummer with artists such as Jenn Grant, Michael Feuerstack, Paper Beat Scissors and others, has woven these lyrics with ambient acoustic and synth textures, pop grooves and percussion, creating a sound that is bouncy, bold and entirely new. MICHELLE ELRICK is the author of two previous books of poetry including then/again (Nightwood, 2017), and she received The John Hirsch Award at the 2011 Manitoba Book Awards. MICHAEL BELYEA is a professional drummer and producer based in Eastern Canada. A few of Belyea’s notable live shows include a "Live At Massey Hall" concert and film in 2017, CBC Radio Q sessions in 2017 and 2014, the 2011 Canada Day concert on Parliament Hill and the 2010 Vancouver Olympics.

TOMMY DOUGLAS KEENAN released his first solo record, Romantic Fitness, in 2010 (as Tom Keenan). The songs range from guilt-ridden sweetness to twangry alt-country to tear-jerking lullaby. Recently his primary music project has been Heavy Bell, a duo with Matt Peters. They started collaborating in 2009, and have since co-written the music for two theatre productions, the zone41/West End production of Am I Not King: The Last Concert of Richard II and Tom-Tom Theatre's adaptation of Shakespeare's The Winter's Tale. In January 2018, Heavy Bell released a full-length album called By Grand Central Station, a song cycle with words adapted from the 1945 poetic novel By Grand Central Station I Sat Down and Wept, by Elizabeth Smart. In March 2020, they will perform the full album with two dancers as part of Prairie Theatre Exchange’s theatre season. He is currently recording a new solo LP.