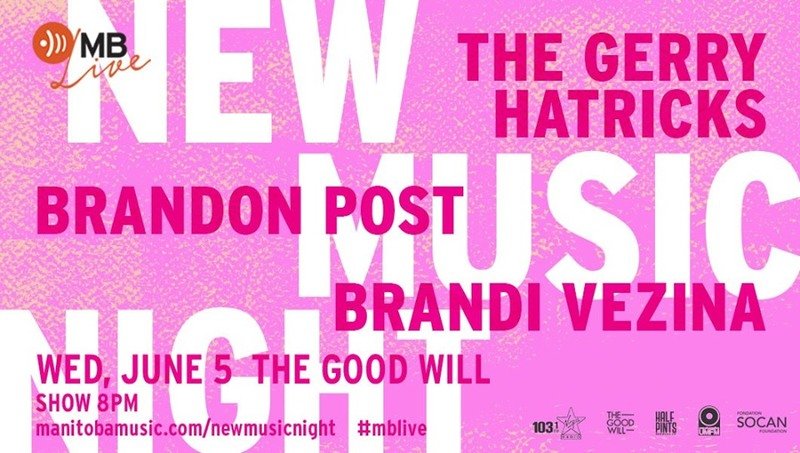 Get a monthly dose of new original local music at New Music Night, which features three Manitoba acts the first Wednesday of the month! Coming up this month...

New Music Night is made possible by the support of 103.1 Virgin Radio and the SOCAN Foundation.

The Gerry Hatricks deliver eclectic high energy folk music with a punk aesthetic. They have come a long way from when their roots first hit the soil. Gerrit Delaquis' unique fingerstyle guitar playing and song writing were made apparent when his first full length album was released in March of 2018. Calm Cloud was composed of many stringed instruments such as acoustic guitar, bass, banjo and ukulele. Kelsey Halldorson of Ultraviolet Collective and Kyle Halldorson of Dizzy Mystics also influenced the album while being featured in some songs. Once the release date was set, a drummer/percussion player was needed. One of Gerrit's oldest friends Cory Olivier fit the shoes and The Gerry Hatricks were formed! Shortly after the release of Calm Cloud, The Hatricks appeared on Mom's House, a Youtube show produced by Young Media. Spirited and Impressive musicianship is what to expect at a live show by this group of close friends. Raw and honest story telling and playing while holding down a jarringly tight performance. The Gerry Hatricks are currently working on new material with plans of releasing an EP in 2019.

Brandon Post is a guitarist, songwriter, and singer whose infectious guitar hooks are backed by carefully chosen lyrics and melodies. Brandon's unwavering passion for music began at eight years old. His latest release, Lifeline, combines blues, pop, and folk to deliver a biting sound squarely between The Allman Brothers and Tom Misch. Brandon has performed in Belarus, Switzerland, Germany, Canada, and the United States. He currently resides near Winnipeg.

BRANZI VEZINA
Brandi is a natural born performer who captivates audiences with her voice and stage presence. Her authentic country roots are intertwined with rock and the blues. Brandi is a force to be reckoned with – her rebel spirit is evident on stage and in her music. Brandi is currently writing and in the process of recording with extraordinary producer, Murray Pulver. She is co-writing with local songwriter, Wes Wilson, with a planned 2019 EP release. Look out for her first single to be released in May 2019. Brandi started singing with the Why Knott Band as a teenager. She was featured on one of their albums. Brandi played gigs with the band, Wolven, in Richter and Ross, Manitoba and the Red Lake Metis Music Festival in Minnesota. She has also sang with the Vezina Family Band representing Manitoba at the Batoche Days in Saskatchewan and sang at the Boggy Creek Metis Days. The Vezina Family Band is a respected family group who performs throughout Manitoba. In 2013, Brandi was a second place winner at the NCI Jam at the Pantages Playhouse Theatre. Brandi has performed at the Manitoba Metis Federation Annual General Assembly in 2013, 2014, 2016 and 2017. She’s played the Aberdeen Street Festival and headlined the 2018 St Eustace Metis Days. She is very proud of her Indigenous roots and represents the Metis Nation with class and grace. She was selected by Indigenous Music, Manitoba Music and the Manitoba Arts Showcase as an Emerging Artist in 2018.