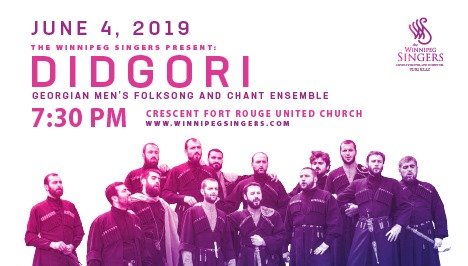 DIDGORI - Master performers of Georgian Vocal Polyphony presented by The Winnipeg Singers.
Didgori - the Canada tour of 2019 - features their six voice ensemble. The Winnipeg Singers are honoured to present the award winning Didgori, from the Republic of Georgia, on their second stop of their Canada tour 2019. This is the first time since the 1970’s that a Georgian choir had toured Canada and the first time ever in Winnipeg. Didgori have been performing internationally since 2004, touring Russia, Turkey, UK, France, Switzerland, Israel, Poland, Uzbekistan, the Czech Republic and Latvia.
Didgori is dedicated to the research and performance of Georgian folksong and chant. Georgian vocal polyphony is a three-part musical tradition marked by immense physical energy, thrilling harmonic progressions, complex improvised counterpoint, unexpectedly dissonant chords and intonation, jaw-dropping yodelling, intricate melismatic ornamentation, and resounding vocal power.
Georgian vocal polyphony has to be experienced in a concert to be believed. Igor Stravinsky reportedly said that "Georgian vocal polyphony is more important than all the discoveries of new music." In 2001, UNESCO recognized Georgian vocal polyphony as a “Masterpiece of the Intangible Cultural Heritage of Humanity”.
The Winnipeg Singers expect everyone will have a “once in a life time chance” to hear and enjoy Didgori’s concert and the masterpieces of choral music they will perform for us in the Winnipeg concert.