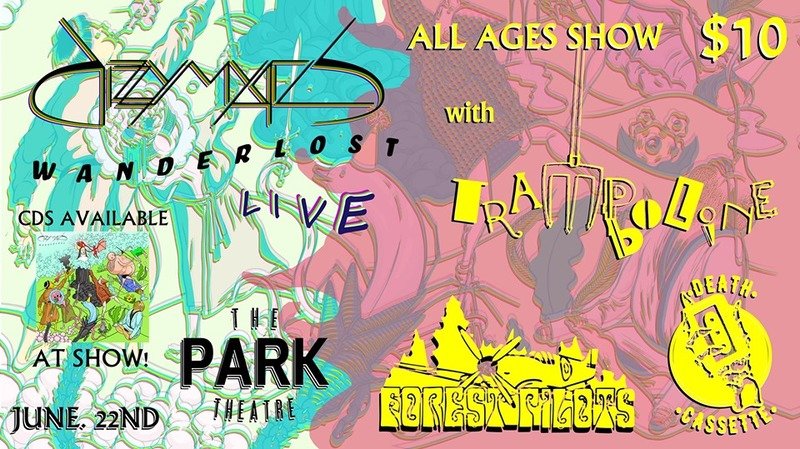 We are honored to have joining us, our friends and special guests..

Trampoline is a charismatic anti-rock outfit that formed in the summer of 2014. At its helm is the idiosyncratic and evocative songwriting of Michelle Lecnik and the creative interplay between Steve Martens (drums) and Joey Penner (bass, vocals). The musical arrangements are cinematic and percussive, blending styles of punk, indie rock and prog, with elements of folk and 90's rock nostalgia. Charged by the whims of satire, playfulness and deeply heartfelt emotion, Trampoline explores the highs and lows of the human experience and has you bouncing while they do.

Forest Pilots is as loud as they are thought provoking. Best described as adaptable, their playing style quickly shifts between heavy, metal influenced riffs, to mellow and spacious psychedelia. The young progressive rock trio consists of: Troy Graham (Percussion/Vocals), John Pelland (Bass Guitar), and Tanner Stregger (Guitars/Synthesizers/Lead Vocals). All three members grew up in the south end of Winnipeg MB, and have a history of musical endeavors. They share an intense and passionate drive to spread messages and tell stories through music.

Dizzy Mystics are a band based out of Winnipeg, Manitoba, Canada.
As the recipe implies, rock music is the spoon that stirs the soup, and no genre (or spice) is out of the question.
Filling out the sonic experience is Kyle Halldorson (Vocals, Guitar, Mandolin), Jeff Laird (Drums, Backing Vox), Alexandre Joyal (Guitar, Backing Vox), and Aaron Bacon (Bass, Backing Vox).

Since their live 2017 debut, Dizzy Mystics have released live off the floor (@ Stereobus) studio videos, 3 singles, gathered a buzz in the local scene, released an official music video, embarked on three Canadian tours, and announced the release of their debut LP "Wanderlost" (May, 3/2019).

"It is clear that Dizzy Mystics may be among the most unique of the vibrant Canadian rock scene to be delivering tracks that will leave fans of classic, progressive, and 90’s alternative rock excited for what is to come." - Canadian Beats Media.

"By the time they reached the end of their set, they were in a full assault of all our senses, and you didn't know whether to jump or ride it out. I say let go to Hell and back!" - Blast Toronto
Reddit
Telegram
WhatsApp
Viber
Your recommendation is submitted.
You have already recommended that.