Screaming at Traffic "I Don't Like Sports" Release Party! 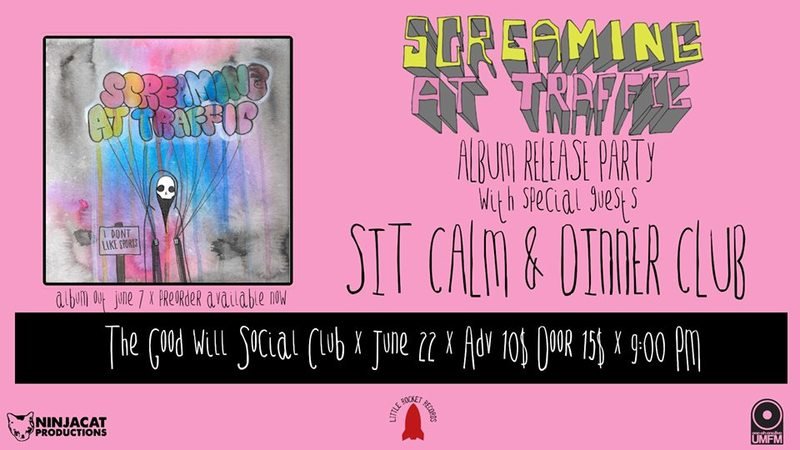 Screaming at Traffic are happy to be throwing a release party for their debut album, "I Don't Like Sports" at The Good Will Social Club in Winnipeg with local pals Sit Calm and Dinner Club on June 22nd, 2019!


Screaming at Traffic is a punk rock band from Winnipeg, Mb, made up of Jacques Richer, Duncan Murta, Paul Colman, and Stefan St. Godard. Their no frills emo-punk riffing add to the group's frenzied live performance and raw yet melodic songwriting.

After forming in May of 2017, Screaming at Traffic premiered their debut EP "S.A.T." via Idioteq.com, a Polish based webzine. In July, the album became available on Spotify, Google Play, and iTunes. The song "Monstrosity" off the group's debut EP was featured in a Spotify playlist curated by the Montreal based website Punkanormal Activity. The EP also began charting on Earshot in October, reaching number 2 in Edmonton, and ranked 9th on the national loud charts.

After a busy summer of gigging, the band mapped out their first Western Canadian tour, kicking off the tour with a local release party for the debut EP. After returning from tour, the band continued to gig relentlessly within their hometown of Winnipeg, becoming notorious for their energetic live shows. They were quickly asked to share the stage with Greg Rekus, The Penske File, Prince Daddy & The Hyena, Mobina Galore, Single Mothers, and PKEW PKEW PKEW.

Eager to continue touring, the band quickly mapped out a successful second western Canadian tour on which they sold out their shows in both Victoria and Vancouver, BC.

Upon returning from tour, Screaming at Traffic teamed up with Jordan Voth (Comeback Kid, Bleed American, Elder Abuse) to record and produce their debut full length. While recording the band caught the attention of the UK based label Little Rocket Records (Leatherface, Daggermouth, Elder Abuse, etc.). In August 2018 Punknews.org announced that the band had joined LRR's roster.

On May 1st, 2019 Punknews.org announced that Screaming at Traffic would be releasing their debut, "I Don't Like Sports" on June 7th, 2019. Pre-orders are available at www.screamingattrafficmusic.bandcamp.com!


Trumpet-infused punk rock four piece from Winnipeg, MB. Hailing from a small town with big sound, their unique blend of female/male vocals lends to their dynamic style. Playing a range of music from the dinner table to the basement. Dinner Club pulls influences from bands like Lawrence Arms, Against Me!, Rise Against, and Gaslight Anthem.