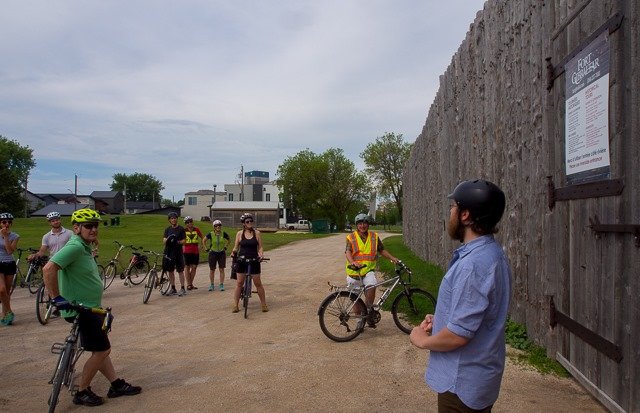 Join Bike Winnipeg and Historian Eric Napier-Strong as we cycle through the early history of settlement in Winnipeg! This two hour, casually paced bike tour will take us from St. Boniface to Seven Oaks House Museum along some of the most scenic bikeways in Winnipeg.

Along the way, we'll learn what make St. Boniface, Point Douglas, and (West) Kildonan perhaps the three most important settlement areas during the early Red River Settlement period, discovering that while their histories are deeply intertwined, each area had its own ethnic, cultural and political dynamics, and how the people of each area shaped the development of early Winnipeg in distinct ways.

The Ride the Red Historic tour starts at Le Musée de Saint-Boniface Museum (494 Tache Ave) and runs for about 2 hours, ending at Seven Oaks House Museum (50 Mac Street) for a tour of the museum along with some coffee and snacks. Leave directly from the museum or join Bike Winnipeg's ride marshals in a group ride back to Le Musée de Saint-Boniface Museum if you prefer.

Tickets are just $20 ($15 for Bike Winnipeg members), with proceeds going to Bike Winnipeg in support of our ongoing advocacy and education efforts.