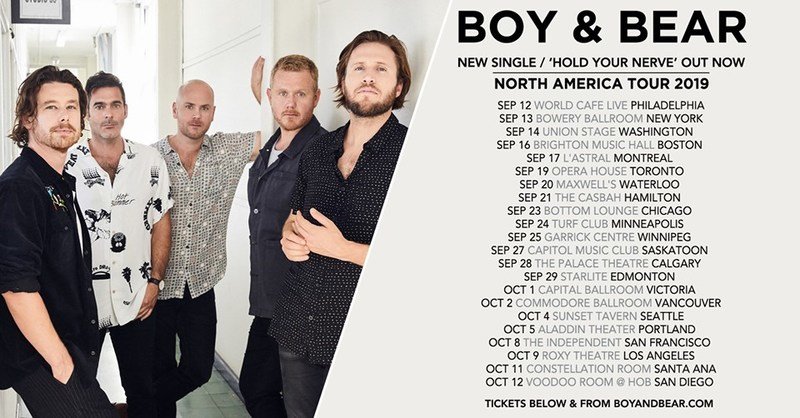 Tickets on sale Friday, June 7 at 10:00 AM CST!
--
After the most tumultuous period of their lives both personally and professionally, Australian band, Boy & Bear are back with a world tour and triumphant new single, ‘Hold Your Nerve’, their first new music since 2015’s Gold-selling Limit of Love.

The band’s position in the music industry was firmly cemented in 2011 after their debut album Moonfire reached platinum sales, won Boy & Bear five ARIA awards and saw three songs make it to triple j’s Hottest 100 of 2011. Two years later came the release of their highly anticipated sophomore album Harlequin Dream, which debuted at #1 on the ARIA Albums Chart, spent five consecutive weeks in the top 10 and has since gone Platinum. In October 2015 Boy & Bear put out Limit of Love, debuting at #1 on the ARIA Albums Chart, making it their second consecutive number one debut.

The band also received ARIA nominations for Best Group, Best Rock Album, and Producer of the Year with Wayne Connolly; as well as a J Award nomination for Australian Album of the Year. Singles ‘Southern Sun’ and ‘Harlequin Dream’ both made it into the 2013 Hottest 100 countdown, taking the 41st and 55th spots.

They’ve completed multiple world tours, including a performance on Conan O’Brian and two sold out consecutive Sydney Opera House shows. As a result, the band received an ARIA nomination for Best Australian Live Act for the 2014 annual awards ceremony.

Boy & Bear will reintroduce themselves to fans with a run of home town shows before heading to North America in September and the UK and Europe in early 2020.